Our blog has now moved to the Bristol and Bath Peregrine Group and can be found at bristolandbathperegrines.blogspot.co.uk


Ed Drewitt
Posted by Ed Drewitt at 07:56 No comments:

Young Peregrine travels from Avon Gorge to the West Midlands

I've been colour-ringing peregrine chicks since 2007 with the help of fellow BTO ringer Ade George, and volunteer climbers from the British Mountaineering Council. In each year I have been building up the number of nest sites we visit to maximise how many chicks we ring. With bird ringing (or banding) it is a numbers game - the more birds you ring, the more likely someone will spot one of 'your' birds and report it. With colour-ringed birds this likelihood increases hugely - while only perhaps 2% of birds with just metal ID rings may be resighted, up to 98% of birds colour-ringed may be recovered.


With my peregrine work the results can be a little delayed. In the first first few years a peregrine's life is very nomadic as it travels around getting to know the region and no doubt look for a mate. So it's not until a peregrine begins to settle at a nest site at two or three years old that it may be seen and identified by birders.


Of my peregrines that have been re-sighted so far, most have been quite close to Bath and Bristol, near where we ringed them. For example, one was seen with a female partner 15km south of Bristol from where it was ringed two years later; another is now the breeding male at a nest in Bath where it hatched; and a third individual was re-seen later in the autumn at the site where it was ringed and had fledged earlier that year.


Our furthest travelled bird however goes to the following individual. One of the young peregrines we ringed in the Avon Gorge in 2010 was also filmed for the BBC's Springwatch.
He was given a blue colour-ring with black letters, BT (his sibling BX is in the photo above)


He was spotted and photographed by Michael Colquhoun in the Malvern Hills, Worcestershire back in April 2011. This was exciting news and it was great to know one of the chicks had ventured so far.


However, I then had sad news in October 2011 that a peregrine with one of my colour-rings had been found dead by a dog walker not far from KIdderminster in the West Midlands. After exchanging e-mails with local birder Jason Kernohan who met the dog walker and recovered the dead bird, I discovered it was the same colour-ringed individual, BT.


He had been dead for four days before being found (as indicated by the development of moaggots). He was taken to a vet by the police for an x-ray to confirm he hadn't been shot. He had been found below power lines and seems likely he had died from some interaction with these.


Despite this young bird's death I'm pleased we know his final outcome and where he travelled. It helps build up a bigger picture of what peregrines do when they fledge. It's interesting that we've not heard from the other four chicks that were in that same family. Yet we have heard from this individual twice! Hopefully as the other four (assuming they are all alive) begin breeding they will be spotted and identified by myself or someone else watching them.
Posted by Adrian George at 13:51 No comments:

It was thought that the peregrines at Bath had starting incubating a week earlier than usual, however this was hard to confirm as the female was sitting very tight. After what we thought was 40 days of incubation, the eggs had failed to hatch. Needless to say we were disappointed as we have been hoping for a full house of chicks as they had back in their first breeding attempt back in 2007 of 4 fledglings.

However it turned out we had got our laying date incorrect and one chick was seen on 2nd May. By the 8th we had four chicks! This was a very welcome surprise and we now have our fingers crossed that all four survive. The adult male 'AA' will have his work cut out to feed four hungry mouths this summer.

As with last year, the BBC are planning to film the ringing of the chicks towards the end of the month.

Thanks to Colin for his continued effort in monitoring the peregrines at Bath.
Posted by Adrian George at 03:25 No comments:

We've just found out that one of our colour-ringed peregrines was spotted and photographed with another peregrine at Blagdon Lake, Bath and North-east Somset on Sunday 11th April. Will bring some further details once we've checked which individual it was. For now here's a link to the Blagdon birds website, http://www.blagdonlakebirds.com/ showing a photo of the bird.

Following just after, a sattelite-tracked osprey was also found to be at Blagdon, www.roydennis.org
Posted by Ed Drewitt at 05:36 No comments:

This Mediterranean Gull was found near the Severn Estuary where Peregrines use nearby industrial buildings.

The corpse showed evidence that can be attributed to a Peregrine kill - no doubt the dead bird then got blown or dropped on to the ground and into the bushes where it was found. Definitely an unusual prey species in the UK but probably more common in parts of souther England and mainland Europe where Med Gulls are found in greater numbers. On the Severn Estuary Med Gulls are found just when passing though on migration. This was an adult in summer plumage. 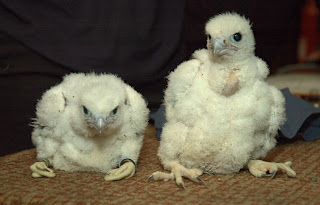 Well, it's that time of the year and across the UK peregrines are busily nesting. Many are now incubating eggs while others are still courting and getting ready to lay.

Over the course of the next month Adrian and I will be busy getting ready for the next season of colour ringing chicks from mid-May in the Bristol and Somerset region. Finger's crossed that it is a good breeding season for the Peregrine this year and we get to colour ring many chicks.
Posted by Ed Drewitt at 11:35 No comments:

Proof of peregrines hunting at night

The evidence at last - 100% proof to support Ed's work on on the diet of peregrines, in particular that they hunt birds such as woodcock at night:


Friends Nick Brown and Nick Moyes of the Derby Cathedral Peregrine Project have captured this amazing footage of a peregrine bringing back a live woodcock back to the cathedral at night. More more details available at their blog:
http://derbyperegrines.blogspot.com/
Posted by Ed Drewitt at 12:52 No comments: